Could you repeat that? 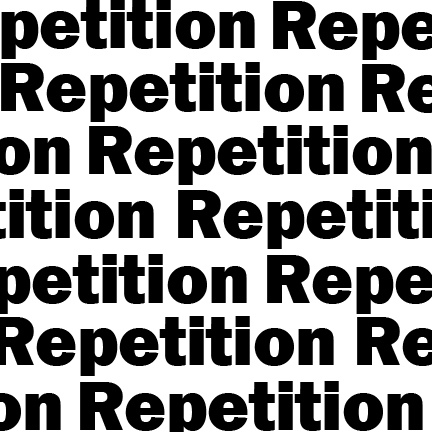 I made it through 12 minutes of The Greatest Showman. 15 if you count the 3 minutes it stayed playing while I went to load the dishwasher.

In 12 minutes, the line ‘A million dreams’ was said, sung and whispered by Hugh Jackman’s entourage 17 times (20 if you include the dishwasher sesh). 17 times in 12 minutes. It was too much for me. So on returning from the kitchen, the film was speedily switched off.

The line (amongst other things) had completely exhausted my interest in continuing to engage with the film. I know repetition can be a good thing though, so where do you strike the right balance?

If you work in advertising, you might have come across the term ‘effective frequency’, used to describe the number of times your consumer needs to be exposed to your message to elicit the desired response – be that buying your product, or actually remembering your message at all. Experts debate the best ways of calculating this number though, with arguments suggesting it could be anywhere between 3 and 20. It’s an idea that’s almost 140 years old, and still people can’t make up their minds. Here’s the basic idea though:

This ‘more frequency = more effective’ approach was proposed by savvy marketer Thomas Smith in 1885(!) – and TBH, the majority still agree. Yes there needs to be enough concentration of media weight to cross certain thresholds, but the general consensus remains that messages are more effective when repeated. Studies have also shown consumers perceive repeated messaging as more truthful and believable, presumably because frequency breeds familiarity, and familiarity breeds trust. This is further supported when you consider repeated exposure to an opinion makes people believe the opinion is more prevalent, and therefore assume it’s a popular opinion. In social psych circles this is known as ‘the repetition effect’, and is the cornerstone of modern political campaigning as well as more workaday advertising.

So – fewer lines communicated more frequently. That makes loadsa sense, and there’s research and psychological insight to back it up. But all too soon you’ll hear a client utter those dreaded words: We. Need. A. Revamp. This is totally fine if there’s a good business reason, supported by facts, logic and research. However, more often than not, people make this decision because they’re bored. Seriously.

If you’ve been involved in developing a campaign – or you’re inheriting one – you can understand why boredom might arise. You see that same line everywhere you look. Not only have you spent six months planning its launch, seen it all over TV, heard it all over radio, and watched engagement with it on social, it’s now on every wall, notepad and screensaver you walk past when you’re in the office. But trust me, you’ll be bored of it a LONG time before your consumers will even notice it. They haven’t nurtured it from scamp to screen. They need time, sometimes years, to orientate to your message, and as shown above, they need exposure to it a lot before they’ll even care about what you’re trying to say. It’s also worth remembering that when they do take notice, they’ll likely only remember one thing about your ad – a strong claim, or a strong concept.

I am not saying don’t run new campaigns, don’t look at new creative executions, or don’t try new channels to market. BUT brands have got to listen when it comes to advice around not changing lines when they’re far from being exhausted. Give your audience time. There’s a chasm of difference between a rebrand and a refresh.

So, I guess to adhere to traditional blog writing etiquette I should try and relate my closing lines to my opening ones – so here’s my scientific conclusion.

‘A million dreams’ played the frequency card, but missed the all important effective point. According to Elder Smith, I should have gone through several stages of ignorance, irritance and intrigue before my 17th exposure to the line and it made me think ‘yep, this is for me’. Oh well, this is why advertising ain’t the same as The Greatest Showman I guess. Glad we’re clear on that.

Maybe I was the wrong audience, or maybe the film is just shit. Guess I’ll never know.