iCopy: Will robots be the new writers? 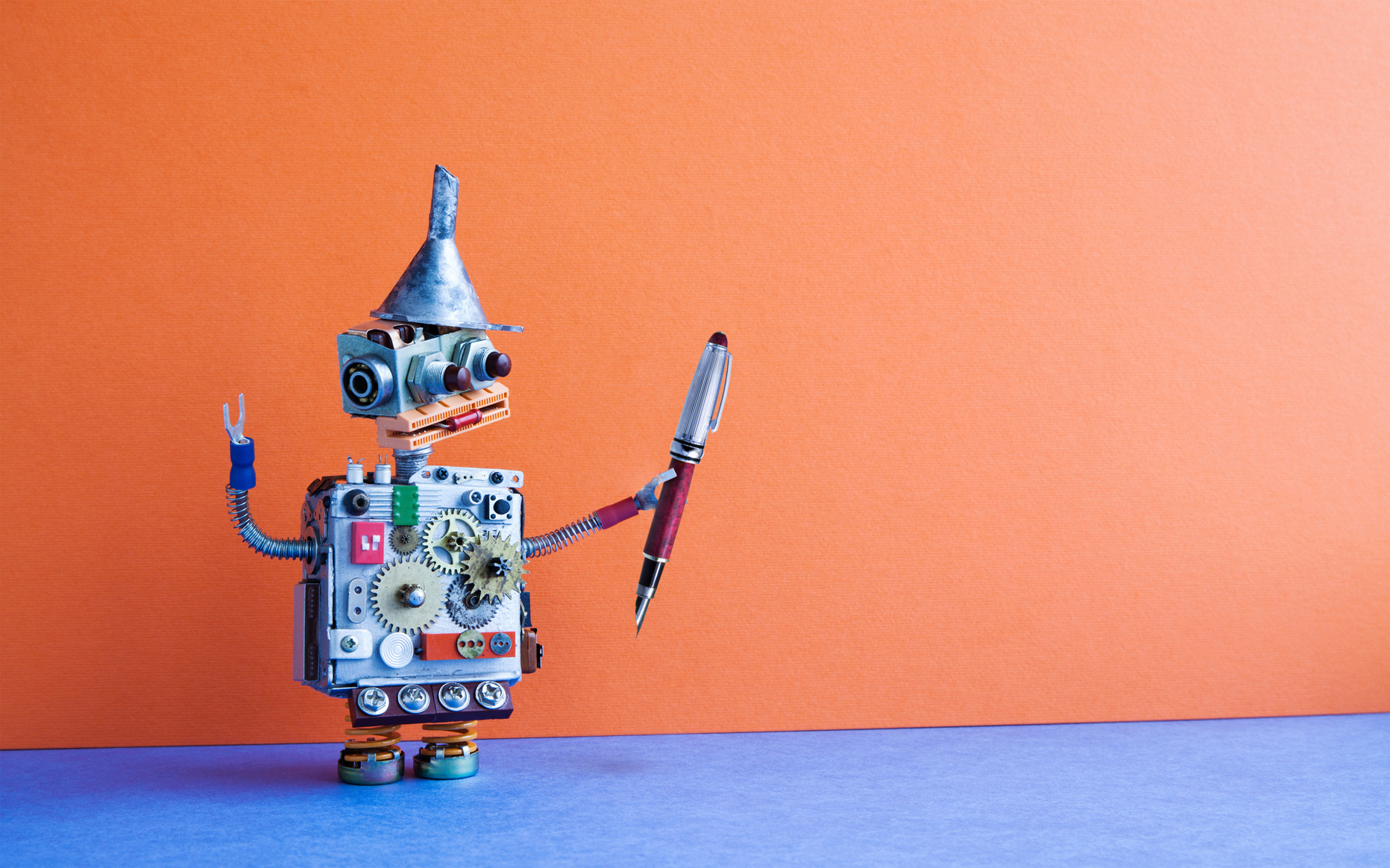 The robots are coming. Correction – the robots are here and they’re changing the future of copywriting as we know it.

“If you want to be a writer, then write.” – Samuel Johnson

Easier said than done for an 18th century writer. He didn’t have the robots trying to steal his job!

Let me explain. We’re all aware of artificial intelligence. Alexa, driverless cars, SMART-just-about-everything. But, why apply machine-learning to copywriting?

For starters, copywriting bots are devils for details… or, should I say, data. They can study trends in ads, lines and much more and repackage these into copy that drives results.

Goldman Sachs has already invested tens of millions in their automated copywriting start-up, Persado. In its own words, Persado uses scientific algorithms to “generate a precise combination of words, phrases, and images that can motivate any audience.”

According to Campaign, Persado “has used “cognitive content” on more than 4,000 marketing campaigns, through Facebook, display ads, email and mobile, by collecting response data from ad impressions.”

As our Creative Partner, Richard Elwell rightly pointed out in 2016, ‘the hackers have hacked the hacks, you could say.’

So where humans can only do so much, robots have unlimited capacity and unlimited access to data. They have a combination of logic and speed that us mere mortals can only dream of.

Where we, at some point, have to stop – robots only keep going.

They won’t spend a lunch break scrolling through Instagram, tell their colleagues how their new ‘healthy’ diet is supposedly going, go home to their family at 5.30pm, worry about getting a good night’s sleep, plan out their annual leave – you get the picture.

They don’t rely on inspiration or creative juices (or wine) either. All they need is a formula and they can write hundreds of versions of the same ad until they find the copy they know will sell.

The million dollar question though, is a formula enough?

While robots can supposedly be programmed to write compelling copy for humans (Persado now even offers one to one emotional language personalisation), they’re missing the vital human element. First and foremost, we can feel. We have our own lives and experiences to draw on, allowing us to empathise and apply that to our copy.

Then there are the rules, some might say, the copy commandments. Like all rules, there to be followed… and of course, there to be broken. Unlike robots, humans know how to break the writing rules and make them work to their advantage.

Ad Aged’s George Tannenbaum’s experience with Sharethrough is a classic example of how following the rules doesn’t always work. In a nutshell, Sharethrough is a headline recommending algorithm based on behaviour model theory, and neuroscience and advertising research. When Tannenbaum used Volkswagen’s award-winning ‘Think small’ headline, the algorithm scored this a mere 38, with the following suggestions for improvement:

Tannenbaum took the suggestions on board and applied every single one. This resulted in the below headline:

“Warning. Alert. When you think about Volkswagen think with both your head and heart, use the strength of your brains and the sinew of your arm, and think about a very small Volkswagen–the likes of which Kim Kardashian would drive.”

Humans have creativity and, if you ask me, that’s something that can’t be engineered.

Assaf Baciu, co-founder of Persado, has said that content automation today is more about working with human-produced content to make it stronger, rather than replacing humans with robot-created writing. People are still the wordsmiths. And, for someone who has wanted to be a writer ever since I can remember, that’s a huge relief.

Baciu goes on to say, “We’re not here about displacing, we’re here about enhancing.”

So maybe robots aren’t a threat. Maybe they’re an asset. Think of the days when you’re snowed under with work. We all have them (my catchphrase on these days is ‘why won’t the words just write themselves?!’) and I know that if a robot could bang out some killer copy and ease my workload at the same time, I’d use it.

The more I’ve read into this subject, the more I think that artificial intelligence is only a major threat to the copywriters who are resistant to change. Who want to keep doing the same things and get the same results.

Emma Park at Isobar Australia puts it perfectly in her War of the Words article:

“There’s no doubt AI is changing our industry and outperforming the humble human in plenty of ways. But to make the most of it, copywriters (and agencies) need to reassess what they bring to the table. Our value does not lie in the words we write, but rather knowing how to use them.”

She goes on to explain that this is helping forge new career paths for copywriters, from linguistics officers to dialogue designers, scientific copywriters and language engineers.

The robots are here and they’re here to stay. Fact. And, while the thought of a robot outperforming and even replacing you is scary, I don’t see that happening for another 20 years. If robots can make copywriting more personalised, efficient, and give me more time to focus on the bigger projects rather than the day to day tasks, then I welcome them.

Machine generated. Written by a human. It’s all there to sell and, if you ask me, that’s what we should really be focusing on.